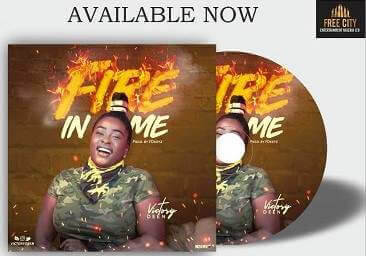 FIRE IN ME by Victory Deen Drops AUG 29

After her exploits with two previous studio albums:

Victory Deen is set to hit the stage again, this time, bigger and better
with her much anticipated single titled: “Fire In Me“.

A song Produced by FDKeyz, and Directed by Jerry Omole
A song she describes as an “Afro-Pop Song”

Speaking further about the upcoming single, she had this to say:
“Fire in the Song represents Jesus Christ…
He shine, he consumes, and he Refines“.

This song promises to reach out to people from across the world,
by creating an atmosphere of Praise to God in their hearts as they listen to the song,
This song is action packed, and will definitely get you dancing already.
The song is produced by FDKeyz, and co directed by Jerry Omole, in Nigeria.

It will be available on all Major stores and digital platforms
on the 29 August 2019, this Thursday
Follow (Click) the link below for song lyrics and preview
Fire In Me Lyrics & Preview

Please Rate this Post by Clicking the STARS below
[kkstarratings]

FIRE IN ME by Victory Deen Drops AUG 29

SEARCH FOR LYRICS (TITLE ONLY)